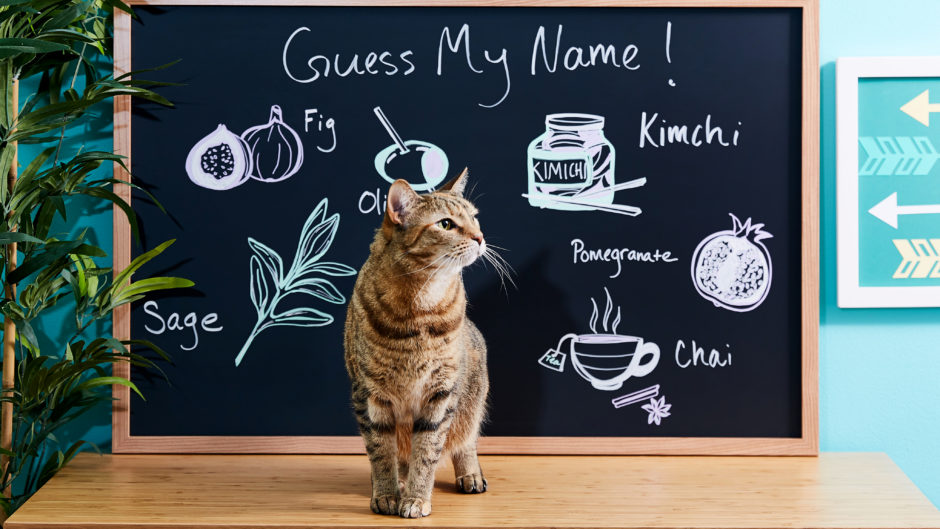 Naming a pet is a pretty big deal. It’s the name you’ll have to be comfortable shouting across a dog park. It’s the name you’ll proudly reveal to a room full of strangers as an icebreaker get-to-know-you fact. Or it’s the name that will appear as your pet’s new Insta handle. You might think you’ll be able to change it if it just doesn’t fit, but once a pet hears their name spoken by their new parents at their forever home, it’s pretty much set. But that’s not something you have to worry about, because we’re here to tell you that you can never go wrong if you decide to go with food names for pets.

To get you started on brainstorming some phenomenal pet names—quirky cat names, cool dog names, pet bird names and even guinea pig names—we’re introducing you to a few pets that happen to be named after food items.

Banana the Bird and Chai the Cat in Portland, Oregon

Meet 15-year-old Chai, an American Shorthair cat, and her brother, Banana, an American Budgie. Out of all the food names for cats, Chai got her name because she’s the same color as a chai latte—it also happens to be her owner’s, Claire’s favorite drink.

When she’s not bunny-kicking her SmartyKat Mer Mouse, you might find her enjoying one of her favorite pastimes—licking condensation off windows, glasses, bottles, shower curtains, etc. Chai also enjoys spooning and playing dress-up.

Banana is a lucky bird who was given a new home after being abandoned in a cage on the side of the road. He’s named Banana because his coloring is the same as an unripe banana, and it came from one of the kids that Claire works with.

This bird loves playing with a plastic donut tied to a shoelace, and in his spare non-donut time, he listens to classical music and sings with his head inside a bell. What can we say—he likes what he likes.

Half Chihuahua, half Miniature Poodle, this 8-year-old pup has one of the best food names for dogs. Though she’s small in stature, she has quite a huge personality. Once Fig the wiry-haired pup decides you’re part of her inner circle, she’s a friend for life.

She likes playing fetch with extra-small KONG Squeakair tennis balls, although she hasn’t quite mastered the “return” part of the game. Tug-of-war is more her speed, and she spends many evenings tossing or carrying around her Busy Buddy Tug-a-Jug or quietly settling down to gnaw on her Nylabone dental chew toy.

But how did she get her name? Fig’s owner didn’t have to look far for inspiration—just inside the fridge to be exact.

There are many ways to make kimchi, the traditional Korean side dish of fermented vegetables, but there’s only one Kimchee the cat (as far as we know).

According to pet owner Kim, when searching for cat names, this feline’s family chose Kimchee because Kim’s husband, who is a chef, had a spell of making a lot of kimchi. Their daughter, Charley, who was 9 years old at the time, loved the name, although she wasn’t fond of the actual food it came from.

When Kimchee was just a kitten, Charley made Kimchee his very own “if I fits, I sits” box. This box has traveled across the country with them twice, and Kimchee still loves sleeping in it and chewing the edges. According to Kim, their beloved tuxedo cat only loves Charley and is completely devoted to her. When he isn’t snoozing in his cardboard castle, you might catch him batting around his Kitty Fun Tubes toys or trying to steal the shower drain (for unknown reasons). Kimchee shares his home and family with Veruca—his tuxedo cat sister—and two Basset/Dachshund mix siblings named Clementine and Jasper.

Garbanzo the Kitten in Miami

This feline-loving family might have come up with the best food names for cats. Garbanzo’s mom, Roxane, says that their sons chose all of the cat names—including several food names for cats: Garbanzo (7 months old), Truffles (age 3) and Fluffernutter (aka Aunty Floof, age 7-ish).

According to her oldest son, “Garbanzo” just popped into his head as a funny name for a kitten. He also thought “Chickpea” would be the perfect nickname (we agree!), and the name reminds him of Gonzo from The Muppets. Apparently that nickname suits her well, because she has plenty of kitten energy, just like Gonzo and his daredevil stunts. Truffles started out with the name “Baby Cat,” but it quickly changed after a conversation about mushrooms. Roxane says that Fluffernutter (Aunty Floof) is “kind of poofy and looks like she maybe ate too many fluffernutters—but she didn’t (she’s very lightweight!).”

The three kitties with food-inspired cat names live with four other felines: Nunces (age 4 ½) , Moustachio (age 4), Xlr8 (age 3) and Mama Cat (age 7-ish). As her name implies, Mama Cat is mother to nearly all of the family’s cats. Since then, they were able to catch her to have her spayed. And because she’s polydactyl (aka a Hemingway cat), several of her kitties also inherited the trait of having extra toes—but only the females. Garbanzo is lucky to have both her human and her feline family. She loves playing with her feathered “worm toy” or her activity mat, taking day naps with her big brother, Moustachio, to rest up before playtime.

If you’re looking for unique guinea pig names, take some inspiration from Nora, who named her Abyssinian guinea pig after a popular fruit. Pomegranate (age 2) was the first thing that popped into her head, which might have had something to do with the fact that her sister was going through an “’OMG I LOVE POMEGRANATES’” phase, as Nora recalls. When she was first looking for a small pet, she planned on getting a black hamster and naming it “Poppy Seed.” But she was dissuaded by a store employee, and instead came home with a guinea pig.

Pomegranate is pretty shy around new people, but he doesn’t hesitate to popcorn all over Nora and snuggle up with her. He has taken a liking to licking fingers and gnawing on sticks (he’s sure to keep these activities separate). Nora’s family plans on getting Pomegranate a guinea pig sibling from a shelter called North Star Rescue that caters to small animals.

Sage the Dog in Madison, Wisconsin

Originally from Alabama, Sage is a 3-year-old German Wirehaired Pointer/Border Collie mix who was taken in by an animal rescue in Wisconsin. He was named at Fluffy Dog Rescue, and when his new parents adopted him, they didn’t want to change it.

“Sage is our house’s favorite aromatic to cook with. But, also the play on words fit his personality so well—he looked so wise and discerning,” says dog parent Stephanie.

He’s a shy dog, but interactive dog toys like the ZippyPaws burrow log and OurPets Buster Cube treat toy have helped to boost his confidence. He was pretty uncertain when he was confronted with snow during his first winter in Wisconsin, and tried to eat the snowflakes before they hit the ground, but this soon became his favorite game. It wasn’t long before he was leaping through the deep snowbanks with pure joy. He saw the yard full of snow as his own personal doggy play area.

Sage has a foster sister named Kearney, a 6-year-old Border Terrier mix. Stephanie says that they “love each other and fight and play exactly like siblings would.”

Here’s a list of ideas for some out-of-the-ordinary food names for pets:

Nikki Naser, Pet Central Senior Editor
Instead of owning 30 cats, Nikki has an impressive collection of 30 cat-themed T-shirts, and just 4 pets—a ginger-haired senior cat, a senior Maine Coon, a middle-aged Choodle, and a young kitty who showed up one day on the back steps. A former Orlando resident, Nikki worked on several tourism publications before moving to South Beach. When she’s not stopping to take pics of community cats to post on Instagram, Nikki spends her time with the office pets at Chewy, writing for their Pet Central blog.